(Leer en español) In the last dinner as a whole group of my master we had a «most likely to be…» prize. One of the categories was who would be a possible dictator, we all knew who the winner but be but I graciously was considered too.

Turns out one of my friends made up a good argument to convince a couple of our classmates of why I perfectly fit the criteria of a future female dictator: I have the necessary charisma and I come from a continent with a long history of dictatorships.

At first I wasn’t so happy with the idea but later I got used to it and decided to go deep into the subject. I am going to write about 3 things. What general requirements define a dictator, my work team and my government plan in case I one day actually go crazy and decide to be the highest authority in a nation.

** For reasons of privacy the names have been changed, but I can tell you that there is an Israeli, a New Zealander, and five Americans committed to my cause.

All citizens must have a pet, by preference a dog, but exceptions will be made for cats. No private schools, education will be free and accesible for everyone, we will have school until the last centimetre of my territory. Also, medical care centres, there will be no citizen of mine who can not access health care.

The official language will be Spanish, but at school it will be also be taught English as mandatory second language, and basic of Quechua and Hebrew. The official currency will be on tickets (coins are too heavy sometimes!). There will be a separation between State and Church, so people will be free to practice any religion they want to, as long as they don’t get into conflicts.

The sale of plastic bottles will not be allowed and on the contrary we will have water dispensers in strategic points throughout my territory so that people can refill their bottles. We will also have free access to the internet, for which we will install fibre optics throughout the country. On the other hand, we will have a policy of zero tolerance against not recycling, as an incentive points will be given to families that recycle more, these can be exchanged for different benefits.

The programming of ALL television channels will be under my supervision, I will update what is available on a monthly basis and I will conduct virtual surveys on what people want to see next month. We will have specialised news channels according to the focus: sad news, government successes, good news, international news, among others. 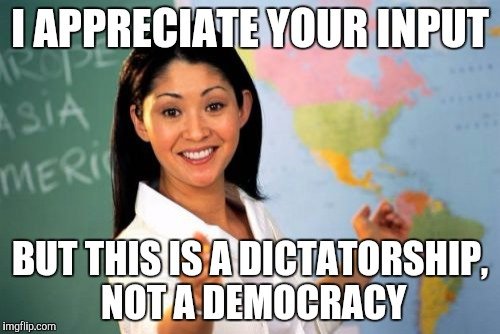 My team will be obliged to meet monthly with representatives of the society in their respective fields to receive suggestions for improvements in their ministries. Both natural and companies must be up to date with their taxes with a maximum of 6 months to get up to date, otherwise, they will be expelled from the country without the option to return.

I am sure that this government plan has several shortcomings, but nobody said that I was perfect, plus this proves why I am not remotely close to being a dictator. Finally, this will be a dictatorial monarchy, and I will be Queen Ana.